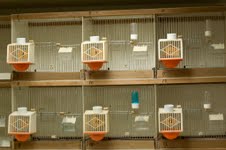 Dear friends of the canaries, still some national exposures and still some
others. Then the great challenge, the world championship arrives, and then the  breeding starts again. I make a point of making you share of something who holds  me with heart. During my judgements, and I also think of several of my colleagues, we were obliged to allot faults to the birds, damage when it is the bird which is in question but here the problem is not the bird but the amateur  who is in fault. Although I already wrote an article on the subject "Perches,"  we perch well still note a faulty maintenance due to the too smooth perches; the  bird wants to take a maintenance but cannot, quite simply because its perch too  is slipping and because the bird tries this maintenance nevertheless, it has beats of tail or a maintenance lying and this because it tries to maintain its  balance. Very often the bird balances itself from top to bottom during the  judgement, or takes the above-mentioned maintenance, very damage, the bird loses 1 most of the time point what is not too serious if for example the bird passes from 89 to 88 but more serious if the bird is very good (e.g. in color and drawing etc...) and remains for example at 91 points for the above mentioned reasons and your colleague stockbreeder obtains 92 points. What is certainly more serious it is than the bird does not have nothing to do there, but well the
amateur who makes the fault. Thus moreover in spite of my article one still meets too many faults due to perches too slipping, too fine and even too large.
WHICH IMPROVEMENT TO BRING? :

It is very simple, I know that the amateur wants to keep his very own cages and it is naturally formidable and it is the standard. But by scouring the perches with, for example, a sponge iron to scour the pans, the perches do not become only clean but also slipping, even results with fine paper to sandpaper. You can use them but ensure you that after some cleanings the perches do not become slipping and I draw as your attention to the thickness of the perch who should not be finer as 12 M/m (mm) and in fact must be of 14 M/m. The too fine or too
large perches give also the same faults.

WHICH ARE THE FAULTS WHICH WE CAN NOTE? :

1. Maintenance packed (the bird tries thus to keep its balance)
2. constant Movement (from top to bottom) of the tail (the bird thus tries to
keep its balance).
3. Maintenance constantly moving (from top to bottom) the bird cannot be almost
held on its perch. 4. The legs of the bird slip.
5. The bird appuye on the partition postpones itself and thus tries to be
maintained in balance.
6. The bird is much in bottom of cage because it tests there more comfort.
7. The bird rectifies itself on its perch in order to keep its balance.
8. The nails do not surround the perch but are on the perch.

WHICH ARE THE GOOD PERCHES? :

All the perches are good if they do not slip and have between 12 and 14 mm thickness but if you buy the new ones, I advise you to buy the corded perches, they are without context the best. But if you do not want to buy the new ones, make your perches a little rough with for example a web out of iron, and are vigilant that they do not become slipping by constant cleanings with a scouring object. While bringing a little attention, the problem of the slipping perches should not arise any more, but better, your birds will take a better maintenance and a calmer maintenance; during the judgement that will bring certainly a point to you in more and often a point makes the decision. Thus without expenses, you can represent yourselves how the bird feels on a perch where it cannot aggriper suitably and firmly; it is not bearable, nor for your birds either. Let us hope for the birds that we will see good perches in the future, the bird will thank you. Success. The page of the Wout.v.Gils.